The exhibition details Huerta’s life from her early influences—such as her mother Alicia and mentor Fred Ross who led to her groundbreaking time as the female voice in the traditionally male-dominated farm workers’ movement—through the United Farm Workers’ grape boycotts and landmark agreements with the grape-growing conglomerates. The exhibition also features many of the people who worked with Huerta on the farm workers’ movement, including fellow organizers Larry Itliong and César Chávez and artistic contributors like Xavier Viramontes and El Teatro Campesino.

Before the movement, the California grape laborers faced open discrimination, below-poverty wages and dangerously unsafe working and living conditions. Huerta and her colleagues sacrificed their own well-being to challenge the system and galvanize solidarity for a better life for them. Yet often Huerta’s name and impact are overlooked, including the misattribution of her coined phrase, “Yes, we can! / ¡Si, se puede!” to other historical figures. When most women were still expected to play primarily domestic roles, Huerta introduced new models of womanhood as an energetic picket captain, persuasive lobbyist and unyielding negotiator. 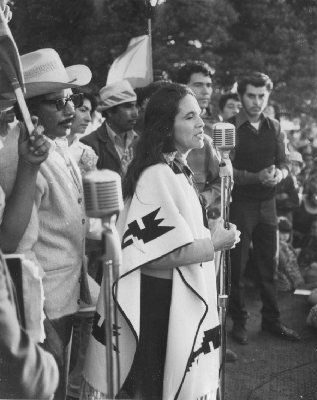